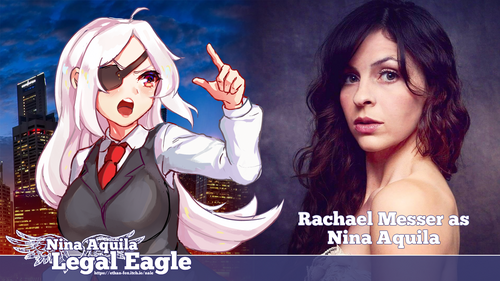 We're happy to announce that Rachael Messer will now be providing the voice of Nina!

Anime fans may recognise her from her current role as Enterprise in Azur Lane. She's also an industry veteran, with countless anime & gaming credits to her name, including Goblin Slayer, Akashic Records, Paladins, WarFrame, and she's playing a major role in the upcoming System Shock reboot!

We got in touch with Rachael after playing Forgotten Anne, believing her voice would be perfect for Nina, and she's brought a wonderful interpretation to the role. NALE is a mainly text-based game, but these voice samples really add a lot of character, and she's really managed to find some emotion in these short, sharp samples.

Not only that, but around the launch of Chapter III, a FREE update will go out for Chapters I & II which will update them to have Rachael's vocal performance!

Thanks everyone! Hope you're that bit more excited about the Autumn release of NALE Chapter III!