Just 8 days to go now until the release of NALE Chapter III, and we’re here to talk about the intro sequences used in NALE, and what inspired them.

Of the things that have brought fans to NALE, or have resulted in big reactions when we’ve watched people stream the game, the intro sequences are probably one of the most significant. The first intro sequence in Chapter I comes within about 30 seconds of starting the game, and is probably the first interesting thing that a player sees.

Following this, Chapters II and III also had intro sequences, made to a similar template.

But how did they come about? How are they made? Well, it’s time to talk about that a bit.

In fact, they have a source that might surprise people. 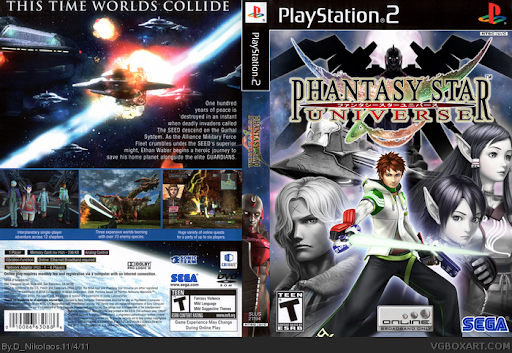 Years ago, I played a game called Phantasy Star Universe on the PS2 (there were several; I had the PS2 version). Not... The best game? Honestly, I always preferred the earlier Phantasy Star Online in its various guises, but regardless, one of the cool things this game did was that the story was divided into chapters, where each chapter had an intro and outro, similar to that of an episodic anime. This was a really effective stylistic choice, and I'd always wanted to make something similar.

However, in a slight deviation from the anime formula, each chapter of PSU's intro featured some scenes and images which acted like a kind of preview of the chapter you were about to play. This is a storytelling device borrowed from the prologues of classical theatre, but in visual media, the show which is often credited to pioneering this approach was (not New Battlestar Galactica, though that show did this to great effect) the classic British Supermarionation TV show, Thunderbirds:

You’re probably getting sick of reading this in these blogposts, but right from the start, I always tried to think of NALE as like an episodic anime, so it was natural that I'd want to do something similar. That made the decision to do some sort of intro on a per-chapter basis something of a given.

Following that decision, the next step was to research anime intros. As anime fans, I think we all have an expectation of a good OP, but once you sit down to design one, you have to factor in things like your budget, and establish what you can and can't do.

One of my earliest thoughts was to rewatch and reflect on this video, an AMV from a few years back that I've always liked:

This video collects together a bunch of examples of many of the stereotypical cuts and themes present in many anime intros, and provided a great source of inspiration.

I knew right from the off that, for NALE’s idiom, I wanted to go with something kinda generic and matching anime-fan expectations - so no Mob Psycho s2 or Cowboy Bebop’s intro. Additionally, some of my favourite OPs, such as several from Inuyasha, were just right out, as it'd be almost impossible to achieve that result with what I had to work with.

I think, if I’m to pick the shows which were the biggest inspiration, they’d include the 2nd OP from Ghost in the Shell: Stand-Alone Complex, Ghost Stories, and the various intros from the Gundam franchise. The reason for this is that while these (and most OPs) have some bits of great sakuga, we knew that for NALE, flowing animation was not going to be an option (just for budget reasons!) so instead, we were interested in those parts which use limited moving footage, with static characters sliding over backdrops.

I was particularly interested in Gundam Wing - not my favourite of the Gundam shows, but rather because of how developers re-interpreted its OPs into a real-time intro in the SNES game Gundam Wing: Endless Duel:

Fans of Gundam Wing will doubtless be able to recognise how they were able to crush the style of Wing's OPs into that very limited format. There are similar examples with games like the SNES Sailor Moon titles; all of these were useful sources of reference.

Once we had this stuff together, I assembled a list of shots that I thought we could create using the assets and tools that we had. Then, I just had to figure out how to do it.

I should mention here that the next step was to pick the music track. I won't go into great detail here because that could be a blogpost all of its own, but suffice to say, there were many, then a shortlist, and finally I settled on one track. This was important; in essence, I believed that the music, getting the right tone and length, was even more important than the visuals at this stage.

So I knew what needed to be made... Kinda. But didn't know exactly how we were going to realise it. That resulted in two iterations; an initial failed version, and the final version.

The first one was real-time, actually in RPG Maker MV. This is where many of the little clips for the final intro come from. However, this was problematic, because it was very difficult to time the sequences to music, and even once it worked, we thought it might be inconsistent on low-spec hardware. There were various mitigations to this; for instance, we tried having the timers for each sequence fire off individually, rather than daisy-chained one-after-another (which prevented cumulative errors), but this was a workaround, and in the end, gave an unsatisfactory result.

The intro sequence is meant to wow people, a bit. It’s supposed to be exciting. Consequently we knew that it had to work perfectly every time.

We also ran into another problem; the video was keyed around a music file that was present on a royalty-free music site; however, once we investigated the price of this track, the cost was extremely high (to be clear; it wasn’t “high” for you if you happen to be The Disney Corporation, but it was high for me as a one-person developer, making a game that had yet to see a single cent in earnings). The work required to key the video to the song would need to be thrown away, and we realised that it was nonsensical to re-do this in the engine, given the overheads.

So we moved to video... And I picked a more affordable music track!

To begin, I recorded as many clips from the old, discarded intro as I could, to try and make use of it.

Then, I created a project in VEGAS, and built an animatic. This was just a series of "text" clips, timed to the music, where each text clip said something like "Shot: Nina in court" or "Shot: Faces in the sky". Once I had this, and I was happy with it, I just had to go through and replace them with the actual content.

This is the project in VEGAS. In fact, that animatic is still present in the timeline; see that collection of clips on the "muted" top row?

As you can see, the final thing is made up of many small clips and little cuts of images with keyframed motion, over many layers to provide parallax. And yes, my track naming discipline is bad, don't @ me.

Much of the stuff I was able to source either from limited motion-graphics of NALE's illustrations, or footage from the old in-game trailer - but I had to fill out some of the more elaborate parts with public domain live-action footage. People have asked if this was a deliberate choice; actually no! What I really wanted were Makoto Shinkai-style semi-animated cityscapes, but my budget was zero, so this public domain footage was what I had to settle on.

Yet, weirdly, that slightly janky mixture of live, 2D and sprite footage has kinda become intro's trademark at this point. It's quirky, I guess.

If I'm to suggest you take one thing away from all this, it's that NALE's intro was, at its core, an exercise in trying to do a lot with so little. In that respect, I'm happy with what I was able to pull off, even if I can clearly see that it falls way short of feeling like a true anime OP.

In specific terms, we wanted a “running” clip (an anime cliche) as well as an “artistic, troubled nudity” moment; however, when I investigated these, it was found that I simply couldn’t afford the animation to make them work.

In much grander, general terms, while cut together competently in VEGAS, the intro lacks the artistic flair or dynamism present in most modern trailers, intros, music videos and AMVs; but as of now, this is beyond my skillset.

However... If I'm to be kind to myself, I think that it reflects so much about NALE, and the project's scrappy nature. The whole thing is lashed together with duct tape, and I'm okay with that.

In the short term, NALE's intro will remain as-is - but in the longer term, I would love to learn AfterEffects and make something more dynamic and exciting. Ultimately though, to do that, I'm going to need more assets, more animations, and generally a higher tier of content to really elevate it.

Talking pie-in-the-sky now, my absolute heroes for all of this are WayForward, who actually managed to get Studio TRIGGER to animate the intro to the latest Shantae:

Totes jealous. I would love to be able to commission something like that for NALE, some day - though right now, that’s so far from being possible that I kinda try not to think about it.

While I’m on, as this is my blogpost after all, I want to say that if I was going to actually do that, I would love to work with Knights of the Light Table, who did the video for Starlight Brigade by TWRP. I freaking love this video; it reminds me of Lensman, which was one of my favourite movies growing up.

Until then, I hope it's helpful, illuminating, or at least interesting to read a little bit about the process! Plus, what is your favourite anime banger OP? Leave it in the comments and I'll check it out!

Come back tomorrow for a post that explains more about Fledge City's "all anime genres at once" setting!