Just 1 week to go until the launch of NALE Chapter III, and it’s time to talk a little bit about its setting, the fictional Fledge City!

Fledge City has yielded quite a few questions from fans over the past couple of years, such as where it’s supposed to be located, and why it’s so named, among many others. I thought now, with Chapter 3 on the horizon, was a good chance to answer some of these!

The genesis of Fledge City actually goes back to looooong before the creation of NALE; it was a setting I created for an RPG campaign, that was actually never used.

In the early 2010s, I ran an RPG campaign using the BESM RPG system, which is an anime-inspired, setting-agnostic, general purpose pen-and-paper role-playing game.

My adventure was in BESM 2nd Edition Revised, but turns out there’s actually a new, fourth edition version of the game. I want to get hold of this at some point in the near future and see what it’s like!

The plot was a hybrid of Gundam and Cowboy Bebop, and took place in a generalist sci-fi setting, and it was a short campaign, maybe ~10 sessions. It went well, the players seemed to enjoy it - the highlight was a heist where they had to steal a microchip that had been embedded into a forged statue at a museum; I still remember how quiet the room got when the spy character started to disarm the laser grid!

However, after that, it made me think about doing more anime RPG stuff in the future, and I started to work on a generalist modern-day anime setting - one where every major anime genre takes place at once.

I really liked this idea; that you could go seamlessly from card battling, to a spy drama, to battling yokai, to magical girls, to touge racing, to mecha battles... There was something really appealing about it. Obviously, packing this much in, the whole idea was to have a comical slant (I mean there’s no way you could do this and actually take it seriously) but it would have a self-awareness that I thought other anime fans would love. In a way, I guess Excel Saga is kinda like that. 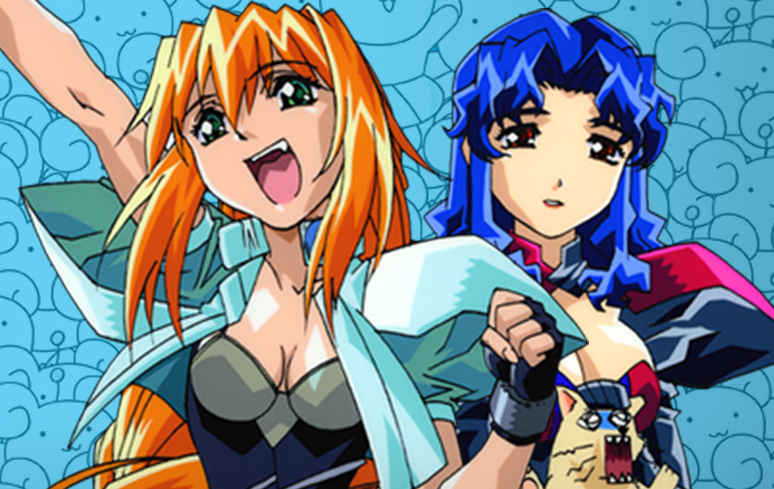 (Tangent, but who else remembers Excel Saga? I loved that show)

Unfortunately, circumstances changed, and I had to shelve the idea, but I held onto my notes.

Going back to my post a few days ago, my own time in Japan mainly involved living in urban areas, and there was a certain cosiness to city life there. The entire “city pop” music genre is heavily couched in this feeling, which is hard to describe... 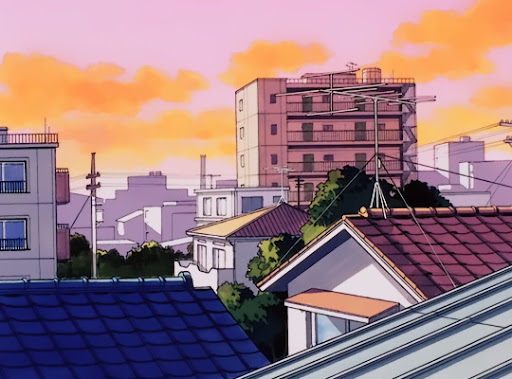 ... but that image above definitely has it.

So, fast-forward to 2018. NALE Chapter 1′s development involved a bit of back-and-forth. The first thing I did was create the first dummy courtroom, which looked like this: 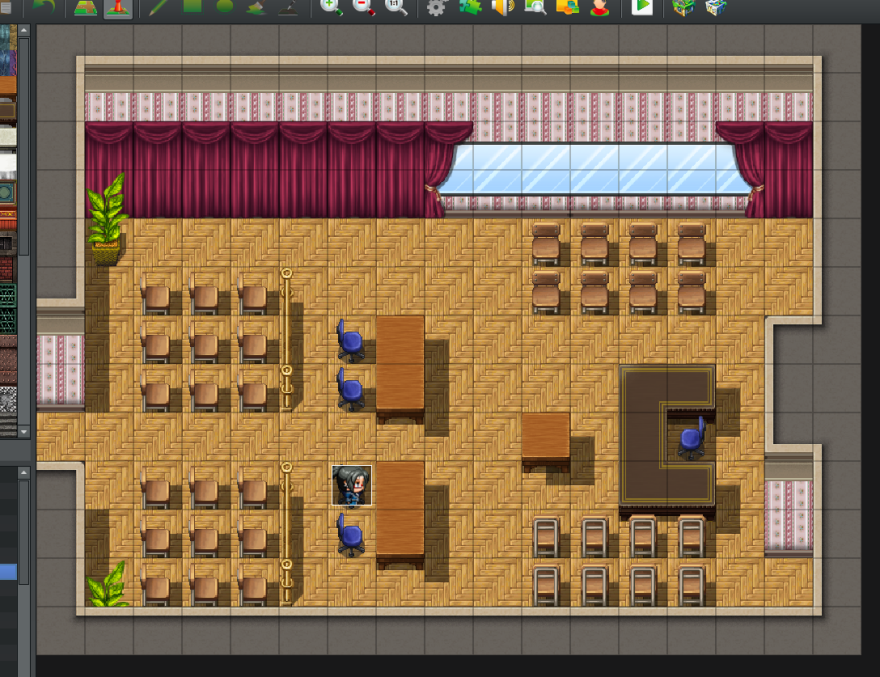 In it, I had LAWYER, OPPONENT and JUDGE, three unnamed characters, who basically just spouted gibberish and shouted OBJECTION at each other, with sound effects and sweeping camera movements. I did this in about two days, originally just as an idle experiment... But by the end of that process, I felt that there was something there that was worth pursuing.

The next step wasn’t to go further with the game - but rather, I pulled back and tried to work out where this courtroom was, who these characters were, and what their motivation was. In part, I was inspired by the Adult Swim show, Harvey Birdman: Attorney-at-Law... 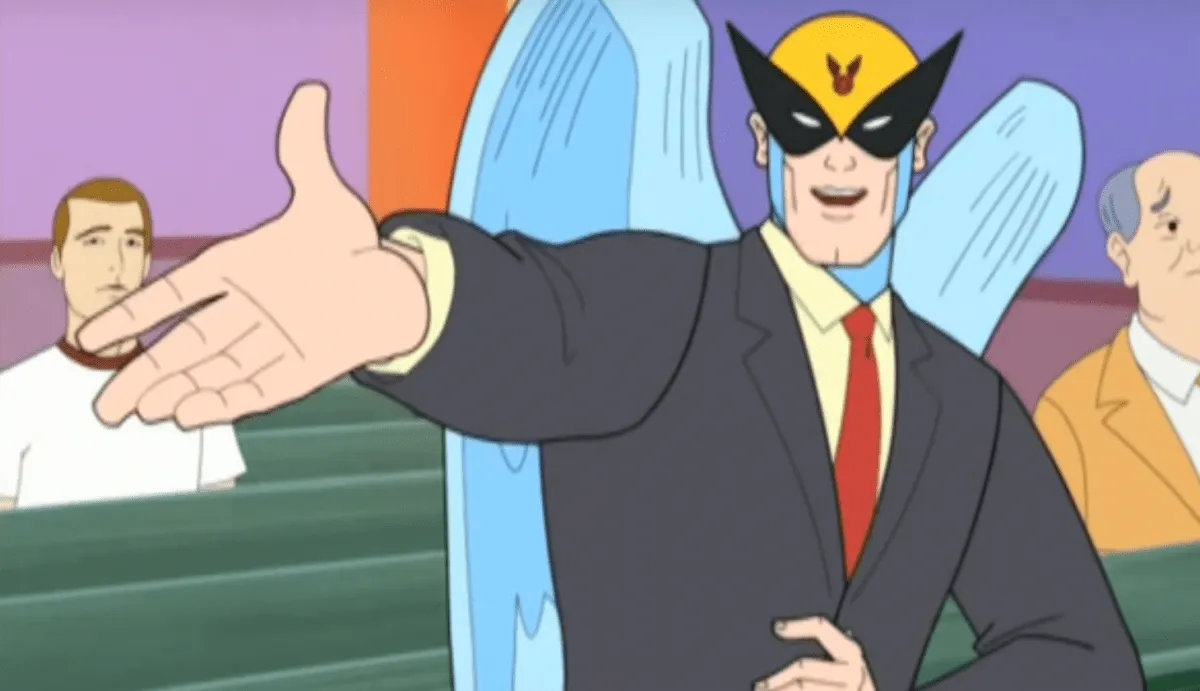 ... in which a parody of the Birdman character (from the old TV show of the same name) goes to court as the defense attorney for a succession of Hanna Barbera characters, resulting in madcap antics.

So as soon as I was thinking of court cases based on anime genres, my Anime City idea from before came square into focus - my character would be an attorney, in a world where all anime genres exist at the same time.

The name “Fledge City” came from two things. I brainstormed names for the main character and game name; I settled on Aquila and Eagle as two words that would be a good fit, and as a result, I wanted something to do with birds for the city’s name.

"Fledge City" was picked from a range of choices because it reminded me of "Ridge City", which is the fictional city in which some of Ridge Racer takes place - in particular, most of my favourite title in the series, Ridge Racer Type 4.

This was pretty much where I was before I started on the actual plot and characters of Chapter 1 - so even though you never got to explore Fledge City in that chapter, I had most of the key stuff worked out. I felt this was necessary, as I needed to give the characters a world to inhabit. I didn’t need Tolkien levels of detail, but just the main points.

So... Where is Fledge City? A few fans have asked this.

NALE is based around a generalist anime setting, and I wanted it to be a bit like Yugioh or so many 90s animes, where the setting is a bit nebulous due to localisation. NALE incorporates a number of stylistic choices which are meant to make it feel a bit more like an anime, and this is one of them. So in the dialogue, Fledge City is in a generalist, coastal US setting, but it’s clear from looking at the street furnishings and furniture in the buildings that those locations are in Japan.

However, the chapters have already made reference to many things which show that Fledge City is not meant to be a true real-world facsimile. For instance, some of the characters have cat-ears (worth clearing THAT up; it’s not cosplay; they’re actual cat-people).

There are also mentions of a war to the north (the games aren’t trying to imply the US is at war with Canada in this setting!). I guess in that way, it's a bit like Springfield in The Simpsons, in that there's the idea of geography, but ultimately, it morphs to suit the storytelling, not the other way around.

So the shortest answer is to say that NALE is in a fictionalised urban coastal US location, viewed through the lens of 90s anime.

So where will NALE go next? That’s part of the fun; as NALE is based on parodying and paying homage to anime tropes, it could go almost anywhere. The only limits are time (and our art budget... (╯°□°)╯︵ ┻━┻ ).

Come back tomorrow for a profile of our main character, Nina Aquila!