6 days to go, and it’s time to learn a bit more about our leading lady, Nina Aquila! 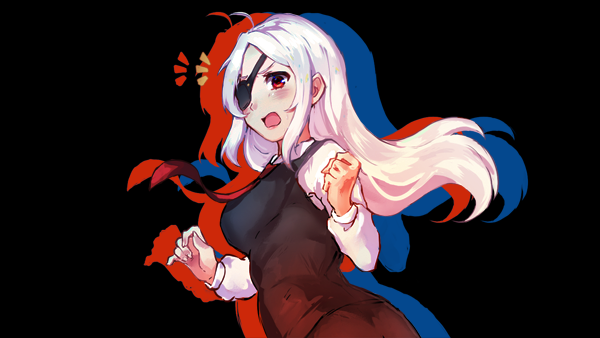 As the titular character, players step into Nina’s shoes during all of NALE, or at least, all of NALE that has been seen so far.

Nina was was born in Canada, but she's also an orphan, and doesn't know a great deal about her formative years. Some of her earliest memories are of her living with her American adoptive parents, and as a result, she has lived in the US for most of her life and is, at present, an American citizen. Academically bright from a young age, Nina was inspired during her adolescence to become an attorney, though she probably didn’t anticipate how this would come about.

When we step into her life at the start of Chapter I, Nina was in the midst of her final supervised case under the watchful eye of Anya Miller; however, events took a dark turn after Anya was accused of a crime, and left her business, Miller Defense & Law, in Nina’s hands after she went to prison.

Between Chapters I and II, Nina struggled to find case-work due to Anya’s incarceration affecting her office’s reputation. Soon, the wolf was at the door, and Nina struggled to pay rent on her apartment. Fortunately, her office’s rent was low, due to it being in one of the city’s oldest buildings; this allowed her to move out of her apartment and into the office in order to make ends meet.

Nina made the difficult decision to rename the office to Aquila Defense & Law, but still saw no cases until Dylan Merlo came to her door, asking her to take Terry Scrubb’s case, inciting the events of Chapter II.

Nina is a memorable figure, even in a place the size of Fledge City, due to her thick, waist-length white hair, and the eyepatch she wears over her right eye. Less obvious to those who only see her fleetingly are the small chunk missing from her right ear, and some rosy scarring on the right side of her face. Nina styles her hair to conceal these a bit, as in the past, people have "recognised" her from these injuries, for reasons that have not yet come up in NALE's story. 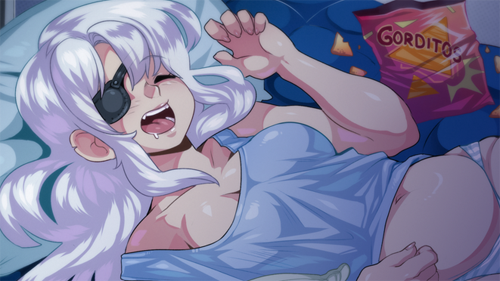 Nina is a tad anxious, and can be quite self-conscious and introspective. She’s messy, slobbish (apart from on court days, where she always turns out impeccably) and disorganised. She’s easily embarrassed, not a “morning person”, and also quick-to-anger and easily riled. Also, she's not always the best "people person", though this makes Dylan her ideal PA, with his early-rising, highly organised, congenial personality.

However, the chaos of Nina’s life has imbued her with many skills.

She’s a master improvisor. Nina is great at seeing the big picture made up by the small details that others would often miss, and being able to think-on-her-feet when the going gets tough.

She’s also something of a situational alchemist, always able to make something from nothing. Nina’s a survivor. She’s been through some dire times, much more than Dylan knows, and she can live through things that would make others despair.

Finally, Nina may not always be the easiest person to be friends with, but she’s dedicated to her clients. She understands that the courtroom can be a scary place for those unaccustomed to it, and she does everything in her power to make sure her clients know that, when all is said and done, she will stand by them, no matter what.

It was this last quality that led Nina to her current, precarious position; for Nina has become aware of a great game being played for the soul of Fledge City, by powerful forces. It was suggested to her that she might be a “player” in this game, but Nina realises that right now, she doesn’t even know the rules.

Nina will need all her courage if she’s to investigate further, uncover the truth and fight for justice.

The above is Nina's narrative profile, but Nina's design also served a practical purpose with the game - Nina is the player's point of contact with the story; they witness and interact with the events from her perspective.

In writing terms, NALE can be considered as "third person limited", in that the game is looked upon with a third-person perspective, but we are limited to Nina's thoughts and feelings. Nina's inner monologue can tell the audience what she's thinking, how she's feeling - but we have to pick up on the inner thoughts of the other characters through interpreting what they do and say.

This approach meant that making Nina a slightly chaotic, anxious, disorganised person seemed to be a good approach, as it allows her thoughts to be interesting, even funny. Her improvisational nature allows her thinking to turn on a dime, so when the facts "fall into place", hopefully this is around the time that this also happens for the player - as opposed to playing a character who plays a 4D chess-game where they've figured out everything in advance.

At the same time, while NALE involves many stories, the "spine" of the game is Nina's own journey, and like all fictional characters, Nina couldn't start out as a legal mastermind who is adept at Xanatos Gambit, or that wouldn't give her anywhere to go.

Each of the long-form NALE chapters, therefore, has to provide Nina a character arc of some sort. Chapter II's arc was about whether Nina can grow beyond her perceived mistakes, and pick herself up after a costly fall. Each chapter actually starts life by identifying what this arc will be, and this informs a great deal of the narrative.

Nina in-game is voiced by Rachael Messer; while NALE isn't a fully spoken game, we have samples for Nina making various shouts and exclamations, mainly in the court segments. Rachael has worked on a variety of high-profile anime & game dubs, most recently voicing Enterprise in Funimation's Azur Lane dub. Currently in addition to dubbing work, she teaches voice-acting; you can find out more about her work here. 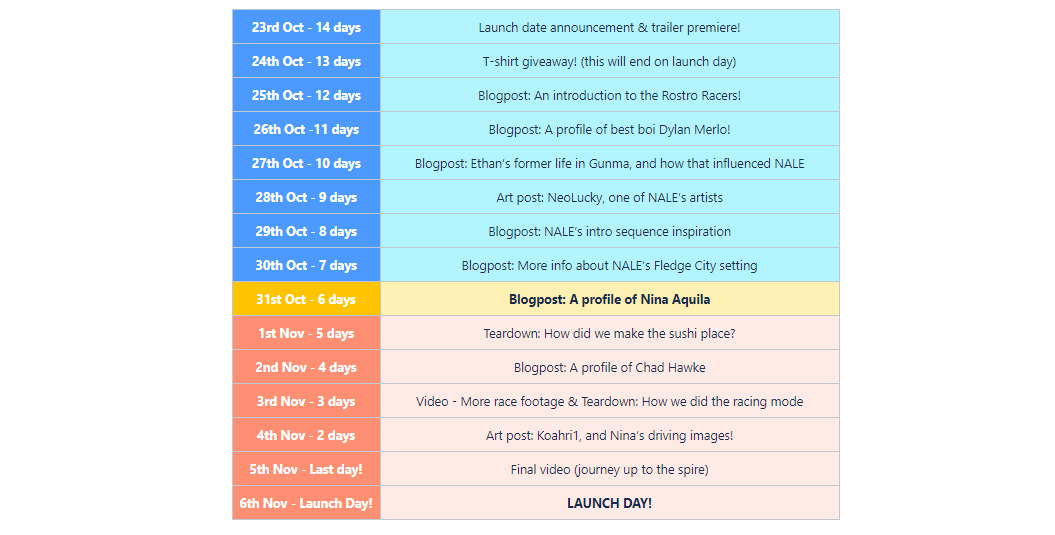 Come back tomorrow for a development teardown of how we made the Sushi restaurant location in NALE C3, and generally our approach to map design! This'll be a good one for any beginner RPG Maker developers.